Another part of the ongoing portfolio work. I was lucky enough to receive a pair of these lovely headphones from Loud and CLear Hi-Fi, and apart sounding pretty damn good (my previous headphones were admittedly junk) the form is not too shabby either, not to mention the materials, these are not plastic. As soon as I saw them I was thinking about options for photographing them for the portfolio. You don't just land work from companies like this, you have have to have something to present that inspires confidence and concept. Sometimes the concept follows later, I just wanted to present some kind of challenge to myself produce a product shot. 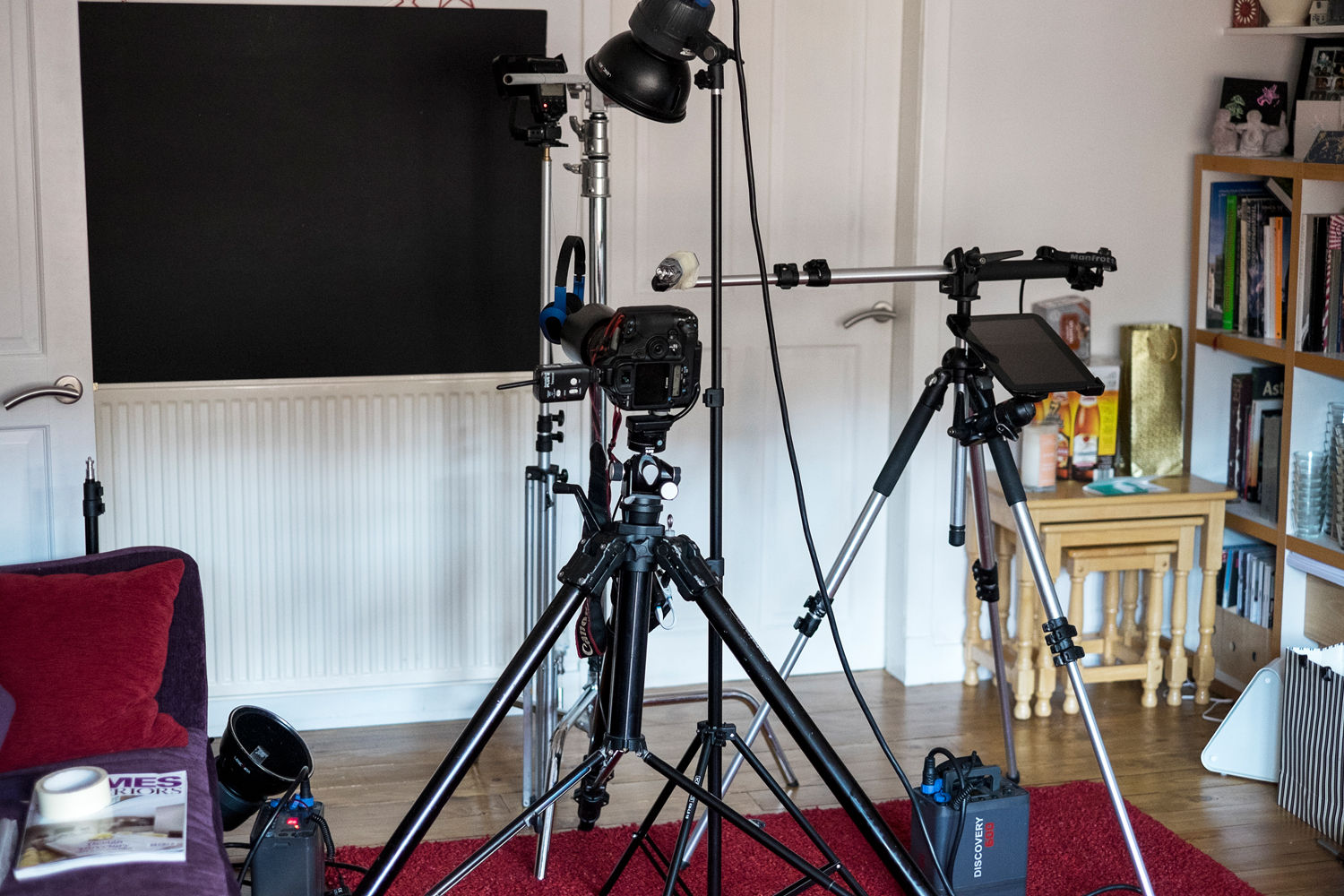 So here is the overall set up in the studio, which also gets used as a general living area, don't be fooled though, it is in fact a studio. Three gridded strobes, one key high camera left and one kicker from low camera left, a small gridded speedlite with a tone of blue gels providing the background light. The light trails were provided by an old LED bike light secured (masking tape is great) to the end of a monopod which I clamped to the top of a rather tired old Mnafrotto tripod, which is in fact made up from bits of a similar old tripod that I managed to break from hanging too much weight off it. The sliding motion of the monopod leg gave me the light trail without touching any part of the headphones which was essential for bagging the shot in one frame. 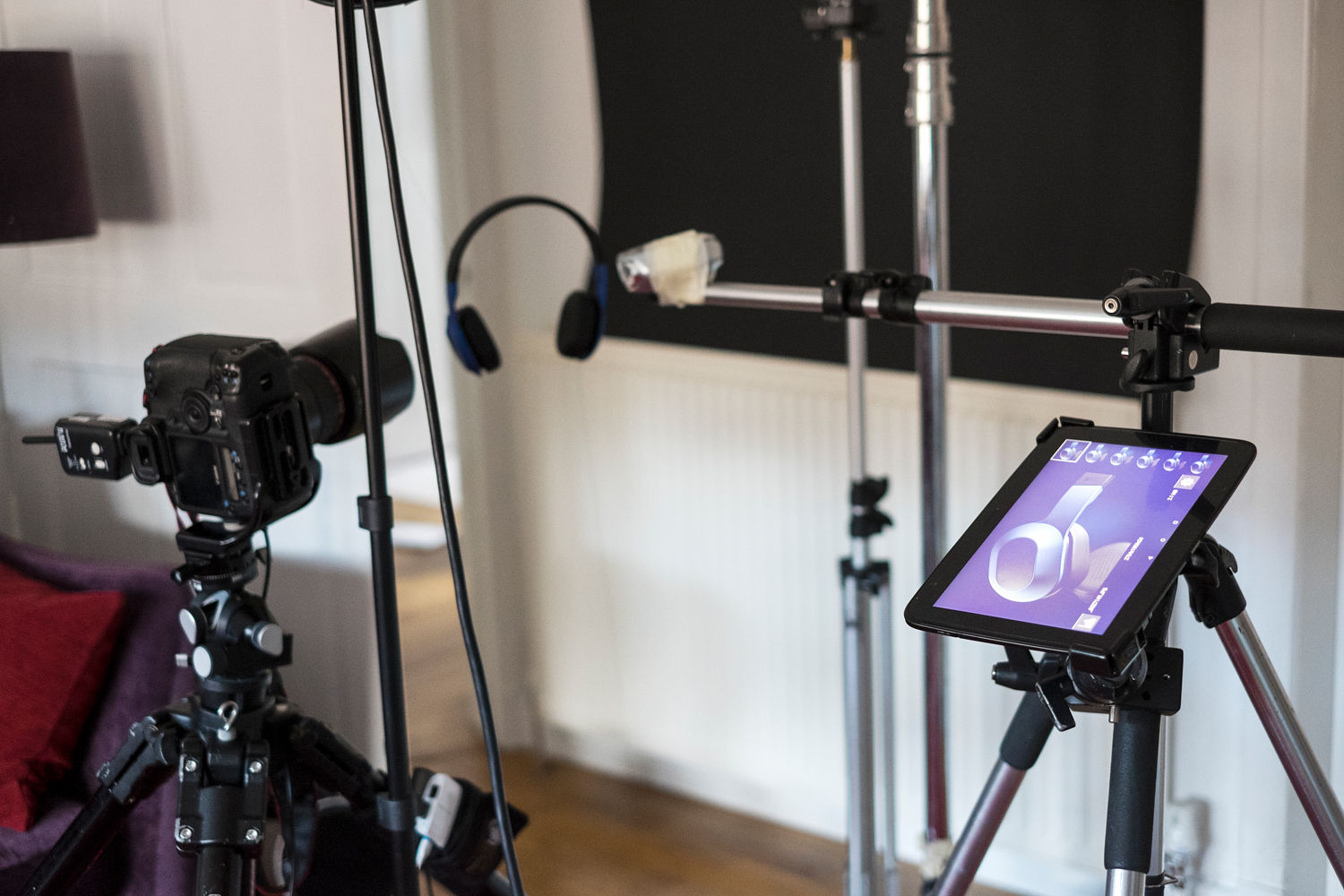 This shows the rig holding the monopod on top of the tripod also supporting the tablet remote control (more on that shortly) to give me the light trails through the centre of the cans. The opening shot above was captured in one frame. No messing about. If I remember rightly it was a five second exposure, I had to close the blinds to kill the ambient light. I also had to stand still for a good few minutes to stop the headphones from moving, the joy of moving floorboards, ergo I triggered the camera from the tablet so I didn't have to move, this was done in a wireless fashion using DSLR Controller check the link, it's a great system for a tenth of the price of Camranger. it might fall short in some regards, but I've been using it for a long time now, and it's good enough for my own purposes at the moment, I have a blog post on that set up here. The Arca Swiss D4 geared tripod head was the perfect tool for this job as well. Bit of a hefty investment for a tripod head, but for shooting the work that I do, it's been indispensable. A dream bit of kit, I've got some thoughts on that on another blog post here. 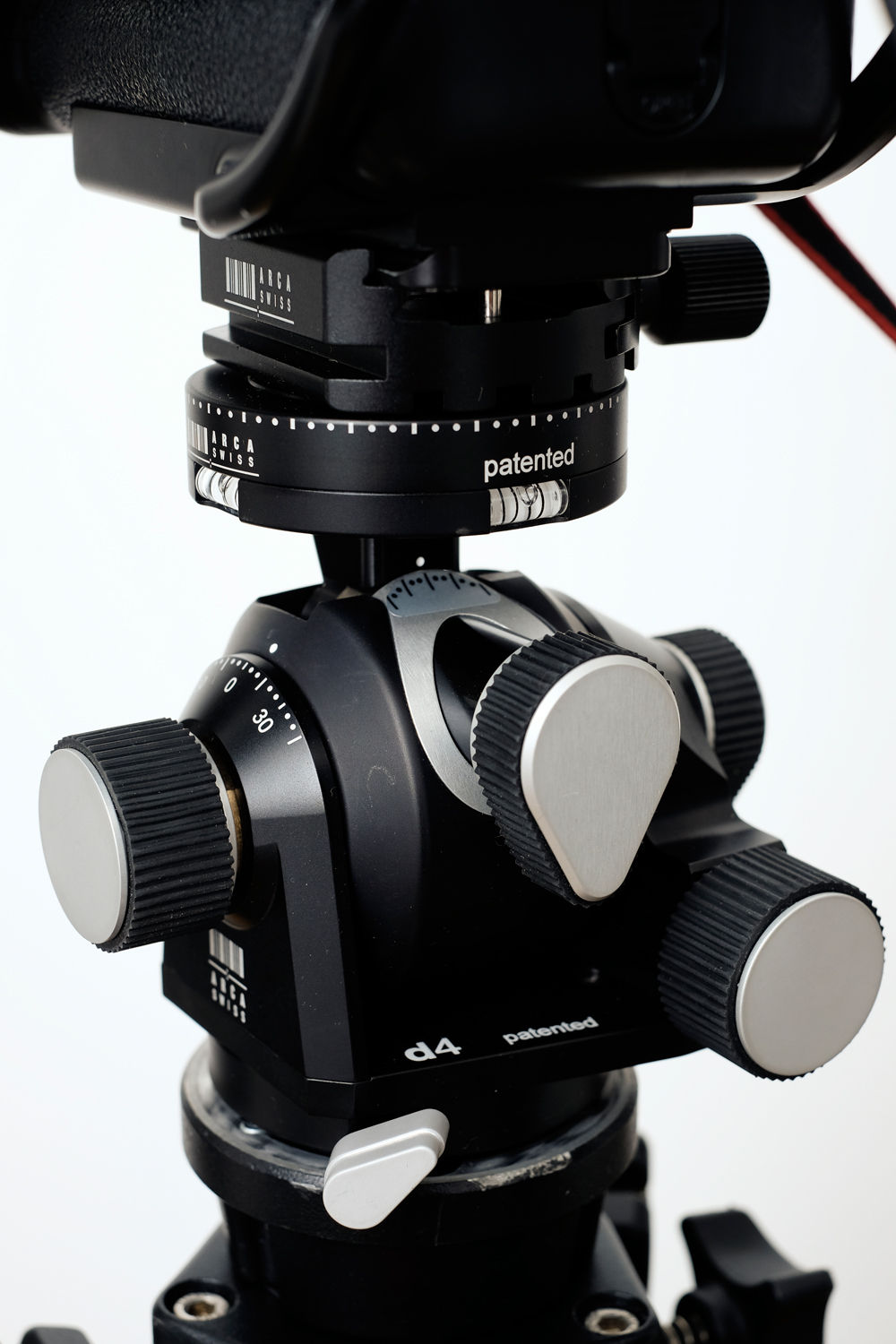 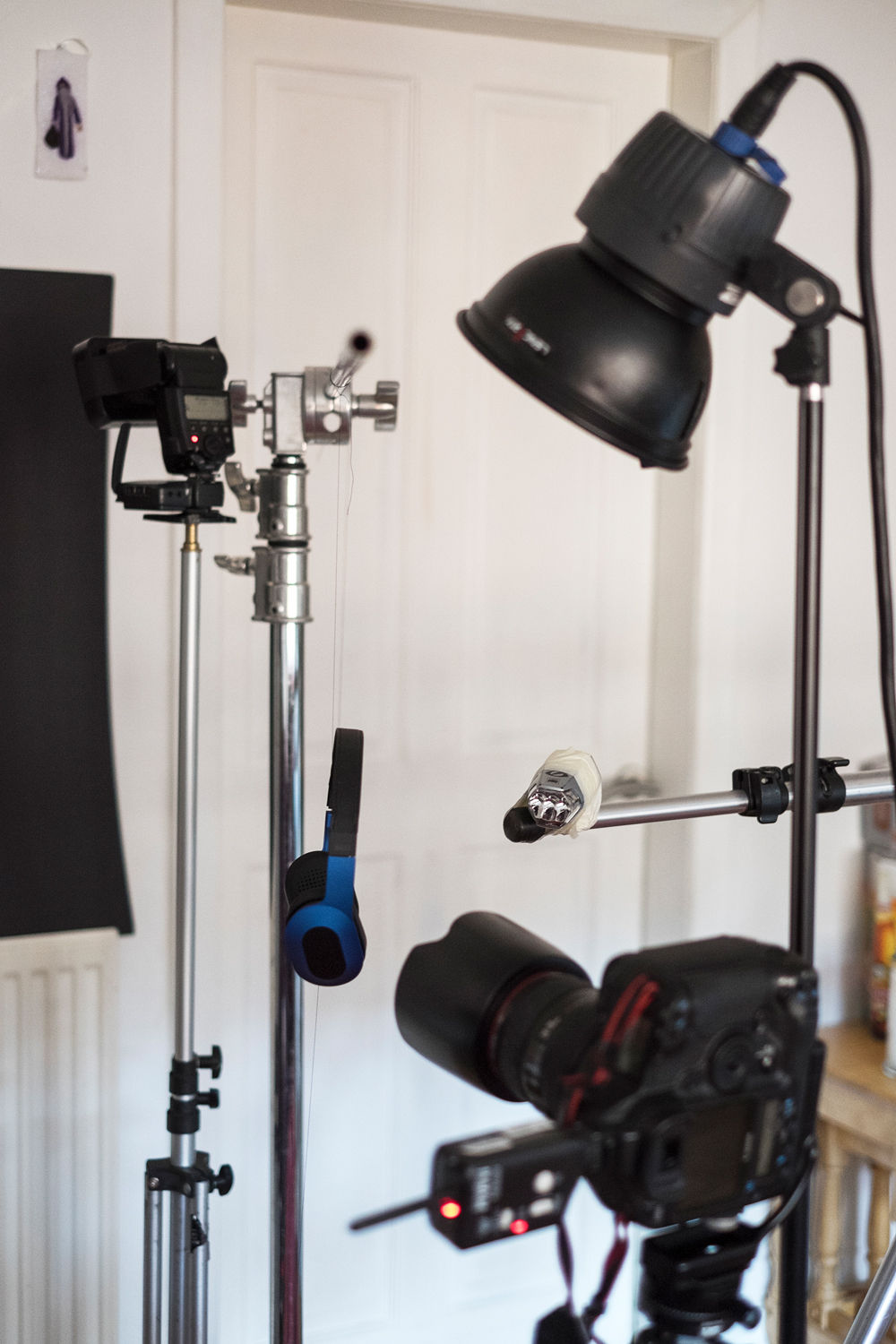 This particular shot above shows the set up for the close up shot below, the main shot with the light trail was taken from way further back with a 200mm lens to keep the perspective in check, downside was losing the sharpness on the back ear piece, not a deal breaker fro me, with a better set up less prone to vibration I could have potentially focus stacked and got it all sharp, all in, not too fussed. 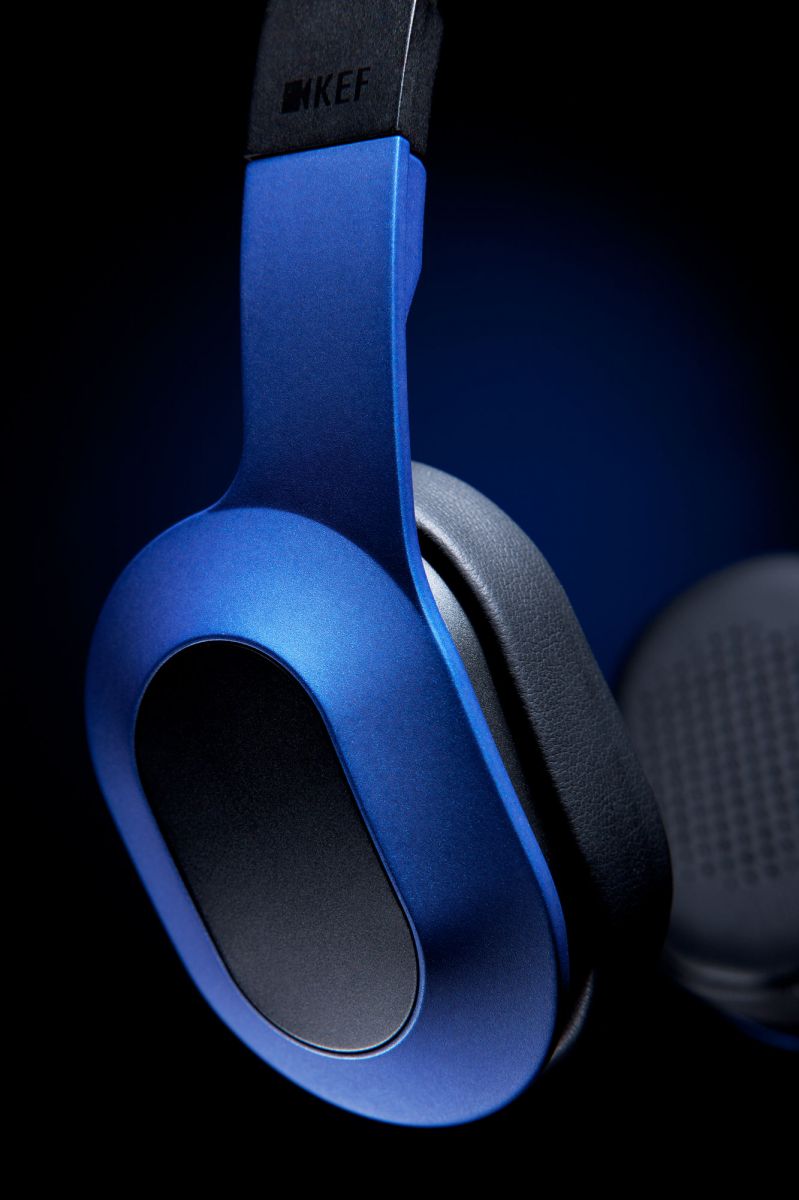 Works quite well without the trail as well, always worth the option when you're going to the bother.

Here's  more straight forward white background shot. I used the Canon TS-E 45 f2.8 with this shot, at full tilt to get everything sharp, just to know that it could be done. Pretty good results and good use of the tilt, not something I employ on a regular basis. Really pleased with the level of detail on this one, good for cutting out as well. 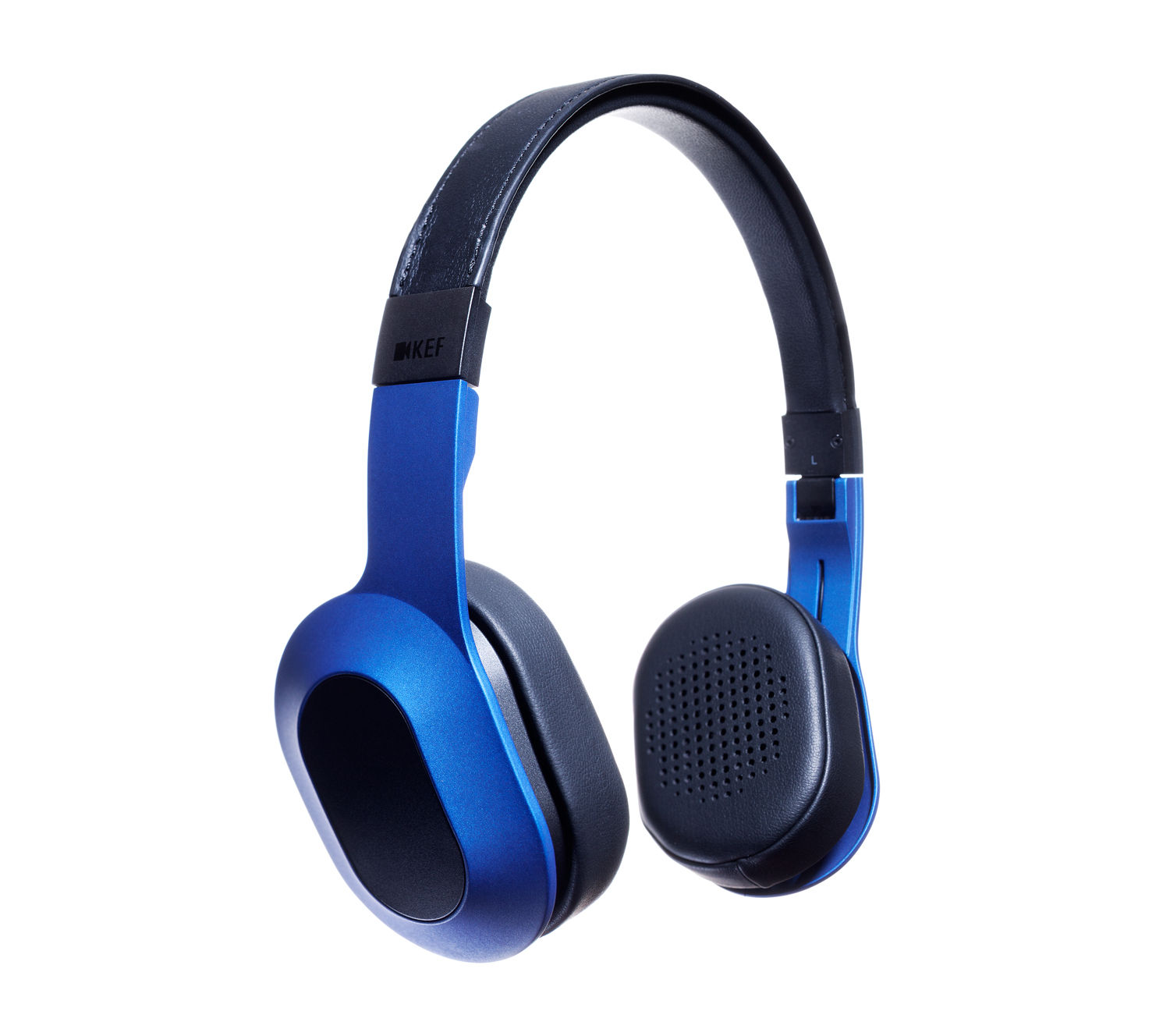 There's a few more shots to follow on these yet, need to get on the case as I've been using them a lot, I'll not go back to those horrible 'in ear' type headphones any time soon, despite these not cutting out as much sound in noisy environments, I'm prepared to live with that.